To exchange, explore and encourage the Confucian ideal of reaching harmony through the arts. 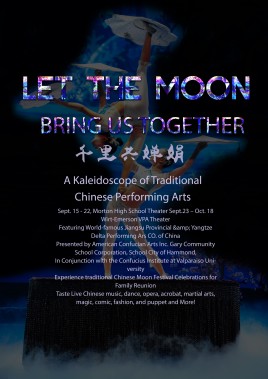 Let the Moon Bring Us Together – A Kaleidoscope of Traditional Chinese Performing Arts is the very first show of the planned The Charms of China Series. As a spectacle, Let the Moon Bring Us Together is designed as a variety show for the traditional Chinese Moon festival celebrations of native Chinese as well as western audiences, to provide them with a feast of assorted styles of Chinese performing arts including; traditional Chinese music, dance, opera, acrobatics, martial arts, magic, comedy, fashion, and puppetry, all while revealing the thousands-year old Chinese dream – under heaven, all become one family.

The Chinese Moon Festival is one of the two most important traditional Chinese festivals (the other being Spring Festival, or Chinese New Year) and focuses on family reunions. The title of the show is inspired by the oft-quoted and widely loved Chinese verse on Moon Festival by the Song Dynasty (960-1127) poet Su Shi, which says families a thousand miles apart can also experience reunion through their common love and appreciation for the beautiful full moon of the Festival (lunar calendar August 15th). It is widely cited as a metaphor that people all over the world can be brought together by things they all love and appreciate.

Like a symphony with four movements, Let the Moon Bring us Together is uniquely structured with four acts called Winter, Spring, Summer, and Autumn, each of which contains 3 to 6 scenes to feature different genres of Chinese performing arts: below are a few photographic highlights.